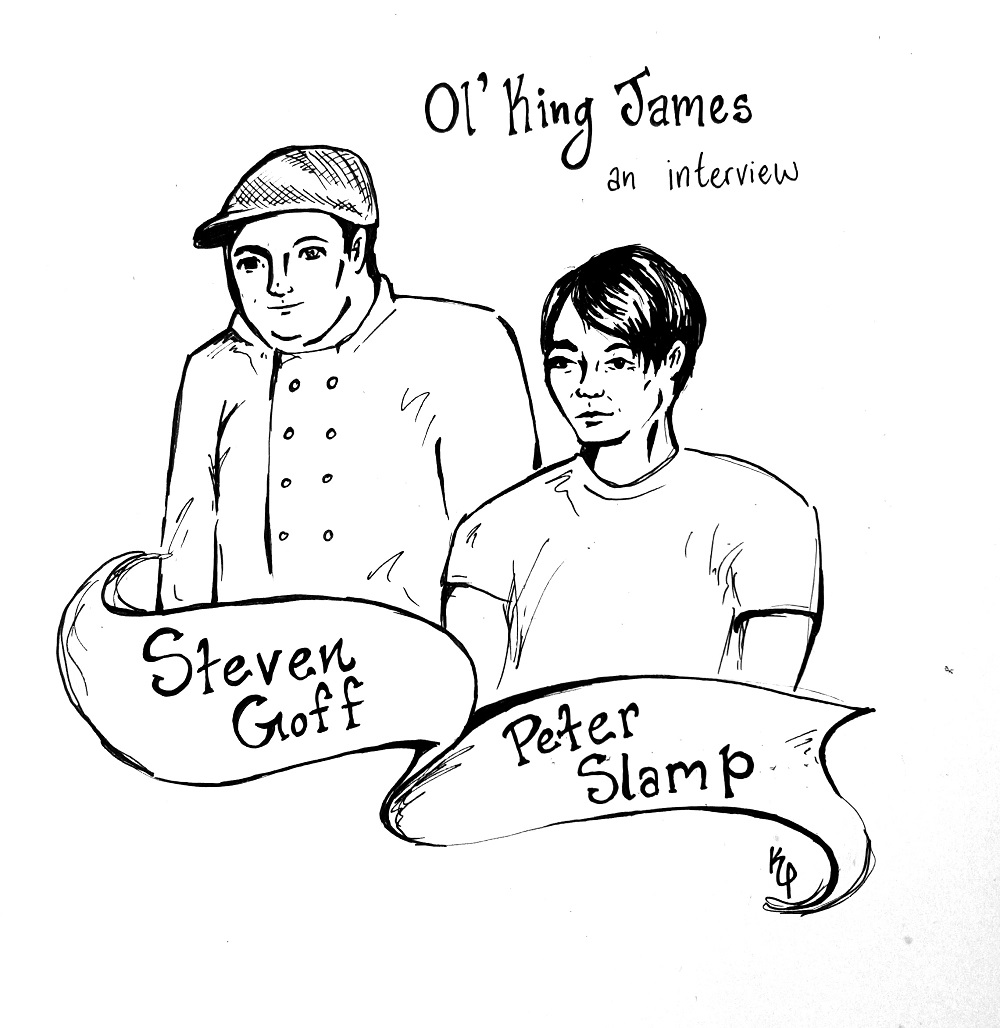 A while back I got the chance to sit down and catch up with Peter Slamp and Steven Goff of the new King James Public House here in Asheville. The interview was for an article in the Mountain Xpress revolving around the “mixed reviews” that came from their hectic and crowded opening. Most of the reviews I heard were glowingly positive and I, personally, had no desire to focus on that aspect of what they were doing, what with them slinging fantastic food and all. But alas, assignments are assignments. You can read that article HERE. There is another story to be told about King James Public House though. So I’ll tell that one here:

Peter and Steven are local fixtures by now. Both having worked in the food and beverage industry here in asheville for over a decade now, you are hard pressed to find someone who hasn’t either been served a cocktail or a meal by one of their hands at the oft touted Zambra. Peter’stapas joint saw Steven work his way from dish washer up to Sous Chef before he left to help open Ben’s Tune Up with Elliot Moss of the Admiral. Both Elliot and Steven made quick exits from that now controversial establishment, and that is when Steven was brought in as Head Chef at the King James.

To say that the opening of King James Public House on the highly trafficked Charlotte Street was highly anticipated would be a great understatement. With so few bars and so many homes within walking distance, the tiny 45 seat bar and restaurant was a welcomed addition to the neighborhood.

“We knew [Charlotte Street] was a void that we could fill,” Says Steven of one of the busier streets in town that contains only one late night bar and restaurant, the grim and decrepit (but still my favorite place to watch baseball over a basket of Sysco Chicken Wings) Charlotte Street Pub. “But so many people would naysay and I kept thinking ‘I hope we’re not wrong!’ And then from the moment we opened it was like, ‘Nope! Absolutely not wrong!'” I drive by the bar every night on my commute, and may I attest that they were most assuredly, not wrong. There is almost always a wait, there is always a crowd and I have yet to be disappointed.

“When we first saw the space it was one of my dreams to have a small intimate place that you can really connect with everybody on a person to person level.” Says Peter, “A big bar, small restaurant, everything about it just sang.” Despite the countless hours they have been putting in at the King James, on top of already having to run Zambra, he still seems wound up like a top, anxious and ready to try it again. Another night, another something to adjust, another process to tweak. “It has been great, but it has also been a little overwhelming because it has been so busy! It’s been a little more crazy than we were expecting, but we’ve adjusted by adding more staff.”

The cocktail list is fairly long,8 to 12 drinks, a special on the board and a rotating Jello Shot.  “I was honestly thinking this was going to be a slow place.” Says Peter. “I was planning on being able to do a lot of the crafty stuff, and take our time, but obviously, it hasn’t really been like that.” And it is not. It is not uncommon to see the staff free pouring the spirits and juices and shanking damn near everything. At one point I saw a bartender shaking a cocktail with the same motion one might use on a Shake-Weight, which almost inspired me to switch to straight liquor, but I figured I’d be a good sport and play along.

“I told my bartenders ‘it’s going to be different here, we’re going to measure all of our drinks and it’s going to be perfect. We can take our time, it won’t be like Zambra where we are just slammed.'” Peter said, “That was my fantasy, i guess. We were only planning on having two people in the front of house! But right off the bat it was just so busy that a lot of that went out the window.” Despite my nit picking with their techniques, every drink I’ve had so far has tasted great, so I certainly look forward to when the crowds chill out a little and we are able to taste what they do when their feet aren’t held to the fire.

One of the most difficult parts of opening a bar or restaurant is trying to temper the guests expectations before it opens. And when you open a place called a Public House, that can mean one of two things. To anyone who has been to Europe, it simply means a bar that is usually open during the day as well, that also serves food. To someone less well traveled, it means one of those tacky, awful Pub style places with all the generic British or Irish brickabrack nailed to the walls, usually named after someone who never actually existed.

“We’ve had what I call the Fish and Chips issue happening.” Says Steven, “When we said Public House, we meant that to imply local. In Britain, a Public House is just a local meeting place, it doesn’t necessarily mean Fish and Chips.” But never-the-less, read the ludicrous Trip Advisor review for yourself. A user named L_S978 complains both of the lack of fish and chips, the “outrageous” prices (Nothing is over $30 for a graciously portioned entree of local fare), and ends with a lament that no one else on earth voices: Why can’t Asheville just have a nice, traditional British Pub (if by traditional you mean Americanized as shit, clearly).

“Yeah, is there cod swimming in the French Broad River?” Asks Steven, “Fuck no there isn’t! There’s trout! So you get trout, because that’s what is local!”

It’s not uncommon for restauranteurs to open only to find a disenchanted audience due to their own misinterpretation of what the restaurant was intended to be. Peter has become used to it by now. He ran into his own problems in his and Adam Bannasch’s attempt to restructure Zambra after purchasing it from Hector Diaz almost a decade ago. “We decided that we didn’t want to be Curate,” says Peter, “we didn’t want to be traditional Spanish food. We’re not sourcing Spanish material. We’re not in Spain, we’re in Asheville. So let’s be an Asheville tapas restaurant, not a Spanish tapas restaurant.”

When Curate opened, Zambra came under a litany of scrutiny due to their lack of “authentic Spanish tapas”, a complaint that, surely, one of you astute readers can comb through my twitter history and find. Little did I know back then, however, that Peter, Adam Bannasch and the crew had much higher aspirations for what they wanted to do. A locally based tapas place, featuring the kind of foods one could only get right here in Asheville. “We’re trying to source here, what we are getting around here, which is not going to reflect Spanish food.” Explains Peter, “it is going to reflect Asheville. But in the beginning of that change people would always bitch about it not being Spanish. Some people just never could understand it.”

“Sometimes you get the wrong guest in the wrong restaurant and it is not either of your faults.” Adds Steven, “Again, yes, our oysters are $3 each, they come from North Carolina and Virginia. I am not buying cheap-ass dirt oysters. So when you get complaints about food costs, I just really feel like those people are in the wrong place. It costs a lot of money to source shit locally, it costs a lot of money to have a bunch of dudes working back here in the kitchen!”

It is hard to balance your costs with your convictions when you decide to open a restaurant with a focus on local product. Overhead is high, prices constantly fluctuate (almost always in the upward direction), and though it may be easy to hide on a small plate or two, the results always end up showing on the prices of your entrees. But the benefit of those convictions is the promise that “Local Breeds Local”, as I like to say.

“There’s just so many locals!” Says Peter, “And that is awesome! That’s what I was hoping for. Being downtown all these years is great, but it has evolved to be such a tourist spot. And it’s been really great [at King James] to reconnect with the local public. Zambra was like this ten years ago, but now days it seems like 60-70% of the business is out of towners. And that pays the bills, but feeling connected with the people that come in is what it is all about to me. When I’m [at Zambra] I just do my job and I don’t feel that connected to the people that come in, and i don’t even think i’d realized how much it had changed until this. It’s really crazy, downtown is just a completely different animal. It’s been so cool to see so many people from the neighborhood every night!”

Because clearly people on the “internets” have no concept of what the idea of an opening month might mean for a restaurant, I heard some complaints of people being unable or having to wait a while to get a table. I assumed these folks were just being impatient, but I asked anyway. And Peter told me, “I’ve been in the restaurant industry for my entire adult life and I’ve never worked in a place this small! I didn’t know what it was going to be like, so I’m learning on the fly too. I think there were some people that were frustrated, but overall the response has been overwhelmingly positive and most people are really appreciative. I think most locals in this neighborhood are just happy to have another option nearby. Last night [the night of a big snow storm] we were still full and it was mostly people that live within a couple blocks from here. It’s pretty cool.” 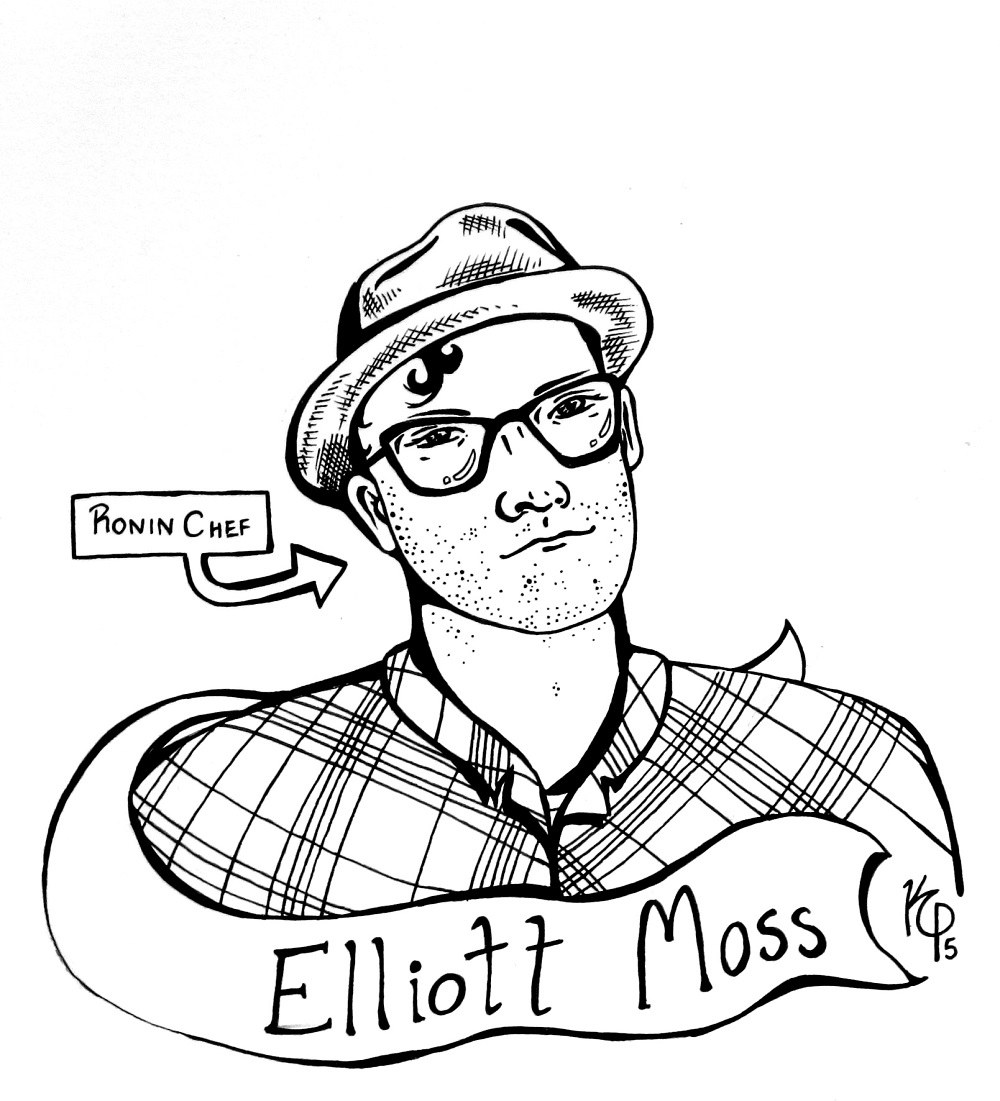