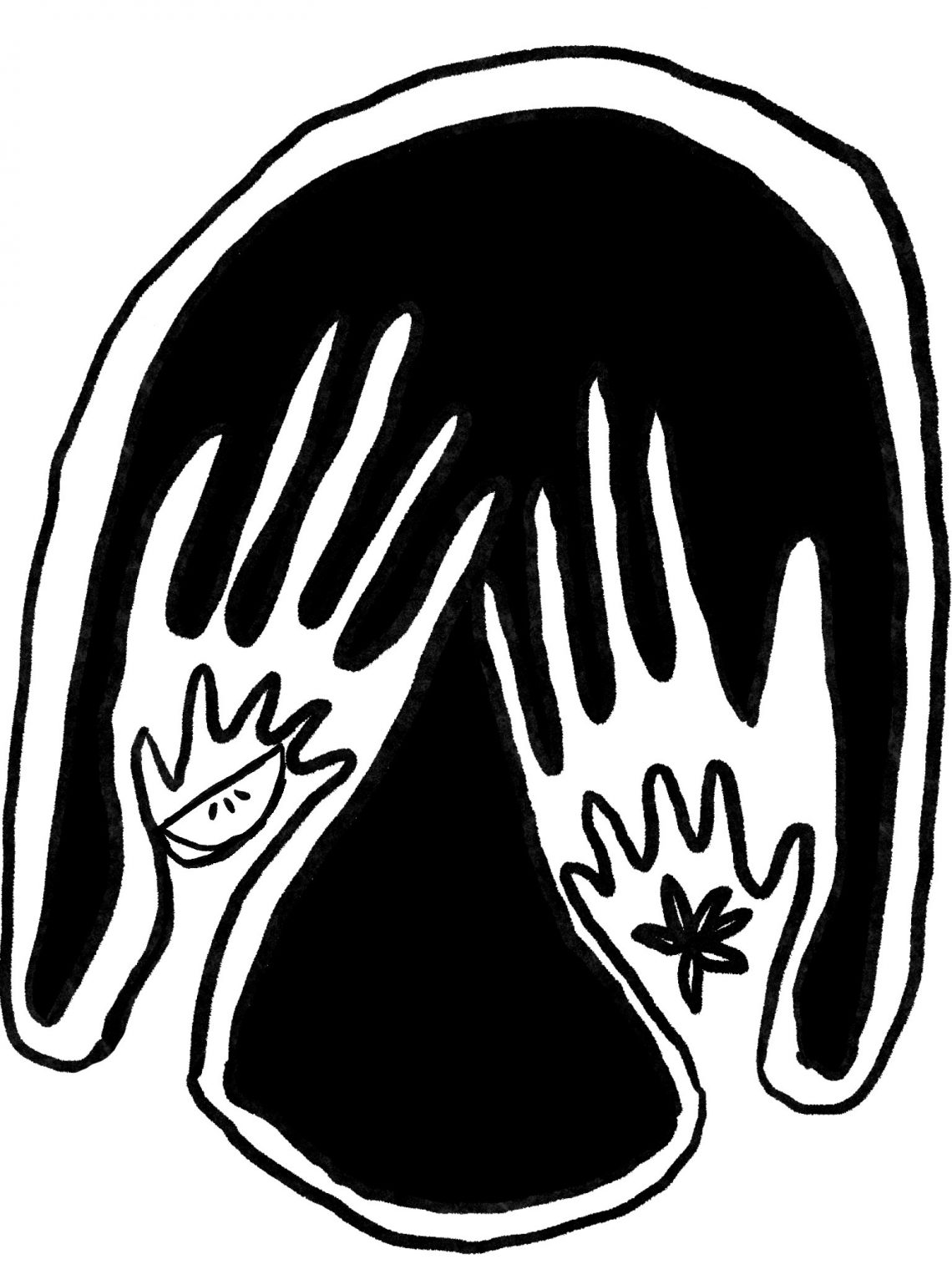 Ever since the birth of my first child six years ago, my father arrives at my home in New York City once a month, holding a box of apple flips: half-moon pastries he orders by the dozen. He arrives early, before 10am on a Saturday, bearing a white cardboard box with the Manville Pastry Shop’s logo stamped in faded blue ink. I have never been to this bakery, but I can tell these mini-pies are made by hand from the lumpy, finger-crimped edges, sticky with caramelized sugar.

After we’ve walked in the park or visited a museum, my father, my husband, Alex, our baby, Zadie, and son, Miles, all gather at the kitchen table for the final act of our monthly ritual. I warm the apple flips on a sheet pan in the oven, then I prepare masala chai. While Alex and my dad debate loudly over Zadie’s babble and Miles’s constant interjections, I crush cinnamon sticks, cloves, and cardamom pods with a mortar and pestle. I pour this aromatic dust, along with a pale yellow heap of grated ginger root, into a pot of water.. When the water comes to a boil, I add teaspoons of loose black tea, then whole milk, then sugar. By the time the chai has fully steeped, the apple flips are heated through, the fruit tender, the pastry golden. I strain the chai into shallow, bowl-shaped cups, and place the pastries on patterned ceramics that glint in the afternoon light.

For a few minutes, the table is hushed as we sip and eat. My father feeds Zadie tiny pieces, crumbs sticking to her cheeks. “Mmmmmm!” she sings in approval, her chubby hands flapping, fingers splayed. Miles, too energetic to sit for long, jumps off his chair to perform his latest joke.

“Nana,” he asks my father, his whole body wiggling in anticipation. “What do twins eat?”

He smiles and sips his chai. “I don’t know, Miles.”

My dad laughs hard, slapping the table, as Miles beams. “That’s a good one! Pears!”

Alex and I have heard the joke at least a dozen times, but soon we are all laughing.

The scene is a picture of familial bliss, as sweet as our tea and pastry. But if you had told me a decade ago that I would be hosting tea parties like this, I wouldn’t have believed you. Not only was I adamantly against marriage and kids at the time, I was also not on speaking terms with my father. The very idea that I would create a family, let alone one that he would become a part of, seemed as impossible as forgiveness itself.

But what I could not have anticipated was how it would feel to see my father, not as the man I feared and, for many years, hated, but as Nana. An old man with a low belly and tufts of white hair sprouting from his long ears. An adoring grandfather ready to laugh at a corny joke. Under the spell of our afternoon tea, I feel the afterglow of my father’s affection for my children, like the indirect sunlight that keeps some plants alive. Our love for Miles and Zadie, these curly-haired, brown-skinned wonders, is probably the only thing we’ve ever truly shared.

I stopped speaking to my dad on Father’s Day of 2008, when I was twenty-seven years old. My father, my younger sister, my older sister, her husband, their two young boys and I were having lunch at a big round table at the Macaroni Grill, a chain restaurant serving oversized plates of pasta that managed to be both salty and bland. As always, my dad spent most of the meal talking to my brother-in-law, barely making eye-contact with me and my sisters. As I picked at my plate of mushroom ravioli, each one the size of a playing card, I listened, aghast, as he complained about his young female colleagues in the lab where he worked. “You hire them to do a job, then the next thing you know, they’re on maternity leave!” he said, exasperated. This, from a father of three women.

When I gave him his gift, a book about Darwin I hoped would appeal to his interests as a scientist, he dismissed it immediately. “I have too much to read,” he said, handing it back to me. It was not the first time he’d rejected my gifts. When I was a kid, he returned the sweater I’d gotten him, claiming he didn’t wear sweaters. Before that, he gave away my gift of a houseplant, not wanting to take care of a living thing.

This lunch was no different than dozens of other meals we’d shared in past years, obligatory “celebrations” that left me feeling small and stupid. I walked back to the car that day heavy with the weight of my doggy bag of ravioli and the book I now had to return. I knew it would take a few days for this sour cocktail of emotions to leave my system, a lingering hangover I experienced every time. In the Macaroni Grill parking lot, I decided I’d had enough.

My parents got divorced when I was twelve, and my relationship with my dad had been strained long before that. We couldn’t talk about the past and his abusive behavior any more than we could talk about my life. He was openly disdainful of my decision to attend art school, and expressed zero interest in my career as a textile designer. I was sick of his casual misogyny and consistent disregard. No matter my age, in his presence, I felt like a child all over again, invisible and unworthy.

For the  next six years, I didn’t call him. True to his proud nature, he never reached out to me. My sisters filled me in on their interactions with him, but they respected my boundaries. We had each spent some years out of contact with our dad; it was almost a rite of passage as a Mattai. My father himself spoke to just one or two of his eight siblings. Over the years, he had written them off, one by one, for some petty feud or another.

It was easier to shut him out than figure out how to deal with him, but I could never completely escape. I started therapy after I realized that my issues with my father were manifesting in my relationship with Alex. My therapist, Dr. Greene, was a grey-haired gay man with thick, expressive eyebrows, and a penchant for novelty socks. In his small office in Chelsea, with its blue carpet and cross stitch throw pillows, he listened to me for a few sessions. One day, he said, “Your father is dead and you need to grieve him.” This sweeping assertion, delivered in his gentle cadence, changed my trajectory. With Dr. Greene’s help, I found ways to face and console the most vulnerable parts of myself. I hadn’t realized how much false hope I had been harboring, hope that my dad would change, hope that he would one day apologize for his wrongs. Weeks, months and years later, I can acknowledge that my father would never be the father I deserved.

By the time I reached out to my dad, I was in a different mental space. Alex and I were engaged, and I finally felt like my father couldn’t hurt me any more. When the two men met, they immediately connected. Just as my dad chatted easily with my brother-in-law, they spoke for hours about sports, politics and current events. I chimed in when I could, and Alex tried to make space for me in the conversation. But nothing had really changed. No amount of therapy could make my father want to know me. For a long time, I felt like a third wheel when we met for dinner, eating in silence as the two men bonded. I was happy they were close, but it was also painful to watch their relationship unfold.

“What a great guy,” Alex sighed one night as we got into our car and drove back to the city. I gulped back tears as we barrelled along the New Jersey Turnpike, shutting my eyes against the white blur of passing headlights. “Yeah, really great.”

“Why didn’t the crab share with his brother?” Miles asks, hopping from foot to foot, too excited to wait for a response. “Because he’s shellfish! Get it? Shellfish?”

Another round of giddy laughter.

As I load the dishwasher, my dad sits on the floor and reads “The Very Hungry Caterpillar” to Miles and Zadie, who tries to pull his reading glasses off the edge of his nose. I wish I could remember moments like this from my own childhood, the feeling of my father holding me or tousling my hair. But these sensations are lost, buried deep in my subconscious.

When it’s time to go, he asks Zadie for a kiss, and she tilts her face up, placing her small lips on his cheek. Miles doesn’t want him to leave, but my dad has a long way home, an hour and a half by car.

“They’re growing well,” he says with a smile as he pulls on his coat. He claps me on the back in a loose approximation of a hug and shakes Alex’s hand.

He opens the gate and waves good-bye on the sidewalk one last time. Zadie squirms in Alex’s arms, trying to get down. Miles is on the stoop in his socks. “Goodbye, Nana!”

I watch my dad walk up the sidewalk toward Broadway, out of our lives until next month. Another Saturday, another box of apple flips, another pot of chai. 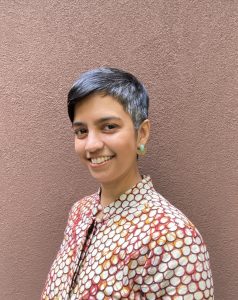 Sumitra Mattai is a writer and textile designer based in New York City. She holds a BFA in Textile Design from the Rhode Island School of Design and an MFA in Creative Writing from The New School. She explores themes of identity and culture in her work. 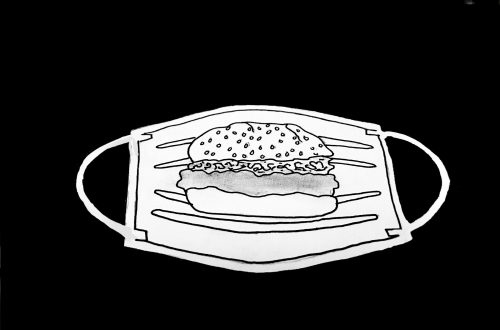 A Sandwich for The Summertime 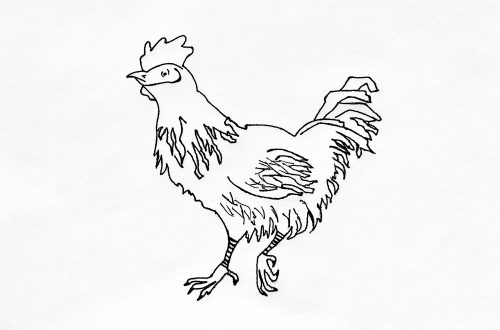